The Royal Air Force in World War Two undoubtedly saved Great Britain from Nazi invasion, and thereby ensured the triumph of Democracy over Totalitarianism for Europe and the rest of the civilised world.  This was happened when Great Britain stood alone with it’s Commonwealth against Nazism, the most powerful and evil regime the world had ever seen.  The USA was standoffish and equivocal, the Soviet Union busy carving up Eastern Europe in alliance with the Nazis under the Molotov-Ribbentrop Pact.  The job of stopping the tide of Nazi conquest was left on the shoulders of a small country supported by it’s loyal Colonies of every creed and colour.

It is fitting therefore on this the 100th anniversary of that brave fighting arm, to mention a couple of members of the RAF that we turned up during our family History research for a couple of families.

Alfred Clayburn Atkey was born 16 Aug 1894 in Toronto, Ontario, Canada, and died 10 Feb 1971.  Although born in Toronto, Alfred’s family headed west to a town called Minebow, Saskatchewan in 1906. When he was old enough Alfred returned to Toronto to work at the Toronto Evening Telegram as a journalist. In 1916 he joined the Royal Flying Corps as a probationary Second Lieutenant.

By September 1917, he was a bomber pilot flying Airco DH.4 with 18 Squadron. May 1918, he was flying a Bristol F 2B fighter/reconnaissance aircraft with “A Flight”, 22 Squadron. Along with Lt CG Gass who was his gunner/observer, he claimed 29 aircraft all shot down within one month. 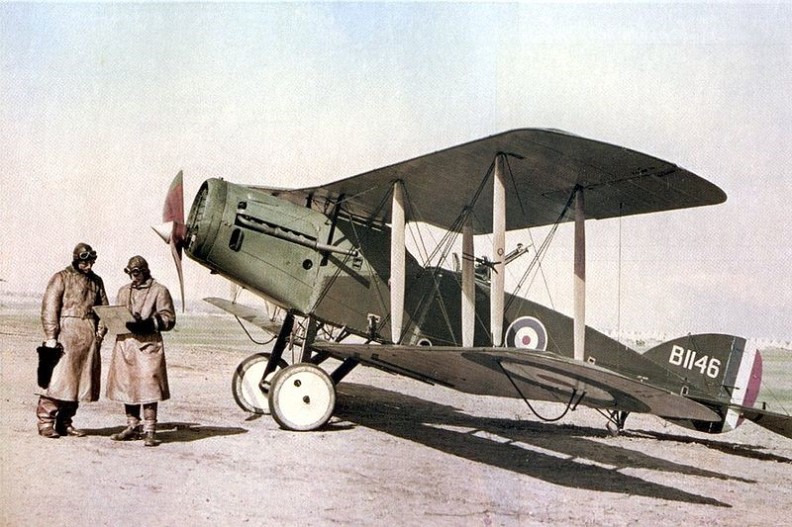 In terms of number of claims, Atkey was the top Allied two-seater pilot of the war. His total number of aircraft claimed shot down was 38 (comprising 13 and 1 shared claimed destroyed, 23 and 1 shared ‘Out of Control’). Gass his rear gunner contributed some 13 of these claims (himself the most successful gunner in the RFC/RAF).

Alfred Atkey’s rank was Captain upon leaving the Royal Air Force at the end of the First World War.  he received the Military Cross with Bar. The following was written about him in the London Gazette:
“For conspicuous gallantry and devotion to duty. When engaged on reconnaissance and bombing work, he attacked four scouts, one of which he shot down in flames. Shortly afterwards he attacked four two-seater planes, one of which he brought down out of control. On two previous occasions his formation was attacked by superior numbers of the enemy, three of whom in all were shot down out of control. He has shown exceptional ability and initiative on all occasions.”

The following was written when he received the MC Bar:
“For conspicuous gallantry and devotion to duty. During recent operations he destroyed seven enemy machines. When engaged with enemy aircraft, often far superior in numbers, he proved himself a brilliant fighting pilot, and displayed dash and gallantry of a high order.”
Alfred married Irene Marshall in 1919 at Portsmouth in Hampshire, more or less within sight of the Isle of Wight where his ancestors had emigrated from 64 years before.
The couple then migrated to the USA, were in the New York area in 1920, and Alfred took the first steps to naturalisation in California in 1924. 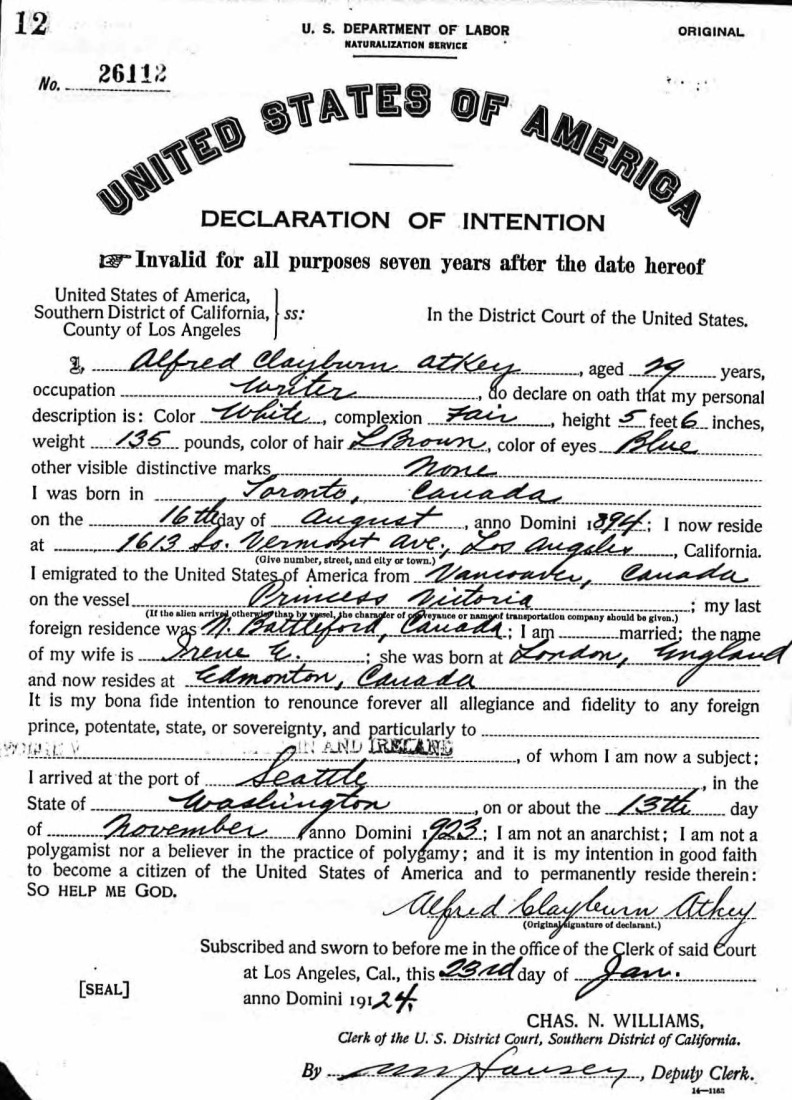 For whatever reasons, the marriage didn’t last, and in 1942 Alfred remarried Dulcie May Boadway, they would have four children.

(For more about Alfred Clayburn Atkey’s Family History, see Time Detective’s blog entry here: A Canadian WW1 Knight of the Air, and his son an Arctic Circle Knight of the Road

A Hero’s Grave in a small French Town

Tracing through the generations, sometimes a name stands out that catches the eye.  One such was a distant cousin of the Family I was tracing among generations of miners in the Durham Coalfields.  Conrad Larnach. 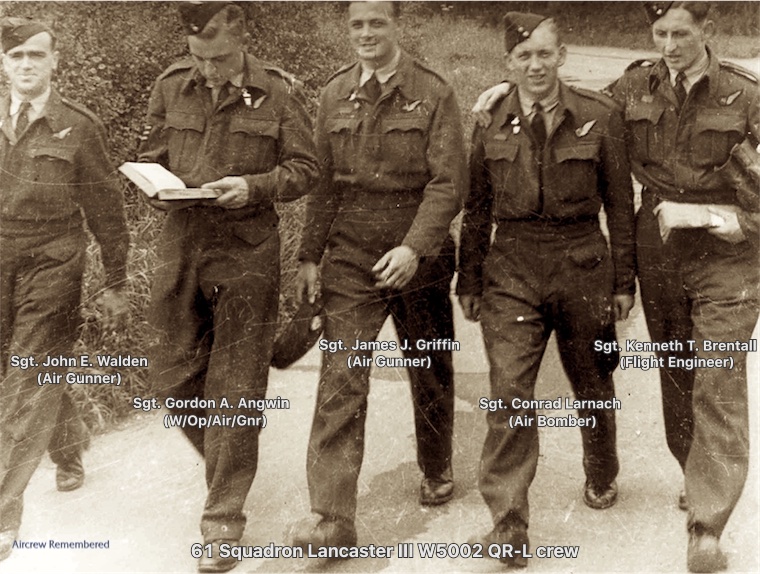 Conrad joined the RAF in WW2, and on the night of 15th August 1943,  “The Pride of London” the Lancaster Bomber Conrad was serving in as Bomb Aimer was engaged above France by German fighter Pilot Leutnant Detlef Grossfuss.

The bomber was badly shot up by machine gun and cannon fire, caught alight, and turned upside down in mid-air. Some of the crew attempted to bail out from the burning upended plane, one Sgt Matthews, although badly burned, managed to get out of the plane, open his parachute and evade capture, finding refuge with local French householders who took him to the French Resistance.  the Resistance protected him for three months, until a daring night time pickup in November 1943, by an RAF Lysander aircraft allowed him to make his escape back to Britain.

Sgt Matthews reported that he was told by the local French citizens that the Bomb Aimer, Conrad Larnach, had also managed to get out and land by parachute a distance away from the crashed aircraft, but being badly injured was found by a German Patrol.  This German Patrol instead of capturing him and taking him back as a prisoner, executed him by shooting him as he lay n the ground injured and defenceless.  They then took his body back to the crashed plane to make it look like he had died in the crash. The other members of the crew all appear to have died in the crash having failed to leave the plane. The only body found more or less intact in the plane was Conrad’s reinforcing the story of his execution.

The Germans buried the remaining bodies in the local cemetery at Rugles, and forbade the local French citizens from attending. However at daybreak the following day the Germans were shocked to see that the locals had risked arrest and execution to come out in the night to cover the Airmens’ graves in flowers. 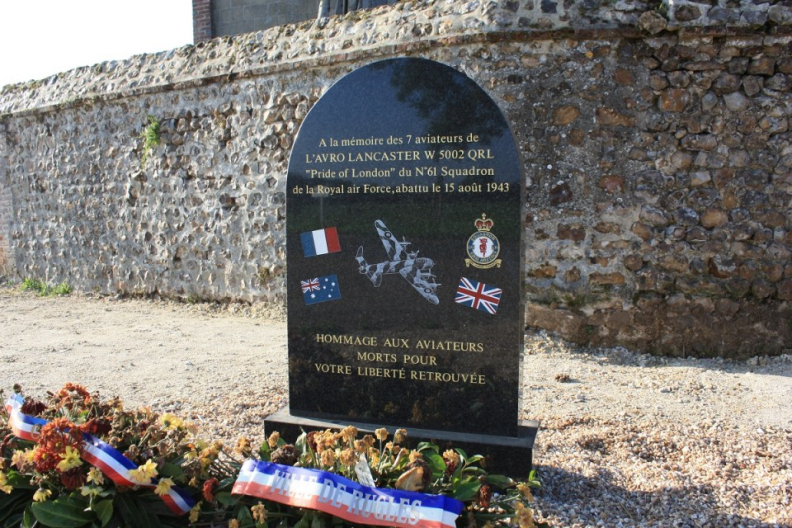 A local French teenager also reported that for a few days after the crash, he saw a German Luftwaffe Officer come to the sight of the crash every morning to stand in silence looking at the wreckage before standing to attention, saluting, and walking away. His identity is not known, but he may have been Leutnant Detlev Grossfuss the Pilot who had shot the Lancaster down.

The Grave is still tended in immaculate condition at Rugles in Haute-Normandie. 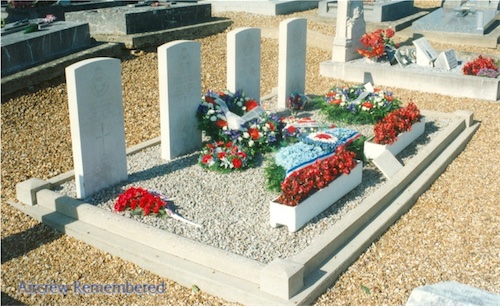 By a very strange coincidence I was holidaying in Normandy a few years ago, and stood in front of this grave at the time. To see the affection that the French citizens of the village had lavished on the plot in gratitude for the young men’s sacrifice, still to this day, was truly touching.
The photos included here were found at: http://www.aircrewremembered.com/matthews-victor.html
And
http://www.aerosteles.net/stelefr-rugles-lancasterstele

If you would like to have your Family Tree Professionally researched, and your Family Story written as an il;lustrated bound booklet to share with your friends and family, then please contact paulmcneil@timedetectives.co.uk for details of our unique service.