Having been born and bred near “The River” in London (there is only “The River” as far as Cockneys are concerned), and having a Dad who worked on Tower Bridge in London for much of his later life,  I’ve always been attracted to the life and history of Rivers.

So you can imagine my surprise and delight when I saw that our local Maritime Artist in Hamble-le-Rice, Barry Lester, had brought London to Hamble in one unique beautiful drawing.

Just in case you can’t imagine it, I have included the picture below, where I am displaying both surprise and delight to save you from having to actually imagine it.  I’m on the left of the picture, Barry the artist is on the right.

Barry loves to spend time drawing with his Grandchildren in London, and having drawn London Bridge “Falling Down” to reflect the children’s’ nursery rhyme, complete with London eye and a modern London Bridge, he was surprised by the amount of interest in the picture by other children and their parents.  Developing the theme Barry decided to draw London Bridge in one of its older incarnations in a more commercial way.

Put which period in history to choose?  The Roman wooden Bridge reinforced and defended by Danish Vikings that was pulled down by rival Norwegian Vikings fighting as mercenaries for the English?  Or perhaps the Mediaeval Bridge over which stormed Watt Tyler’s peasant army?  But no, there was one era of London Bridge’s life that showed it in all its architectural complexity, and one day when London changed from Mediaeval to modern.  That day was Saturday 1st September 1666, the day before the Great Fire of London.

Barry researched the artistic history of the Bridge and found that it had never been drawn in its entirety from that period.  The result is a unique and fascinating view of a London icon as it hasn’t been seen in nearly half a millennium.   That stretches for x feet and draws you in to the hustler and bustle of life in Renaissance London.

Most importantly prints of this fantastic artwork are available for purchase from Barry just in time for Christmas, if you are interested please drop a line to paulmcneil@timedetectives.co.uk.

When did London Bridge Fall down?

It fell down twice, both times it was pulled down by the hands of men.

The tune and words of the nursery rhyme above had been adapted and formalised in the 1600s, but the song and the “playing at arches” a children’s game where by the players held each others’ hands above their heads to form an arch, whilst their friends held hands and travelled underneath,  had roots going back into mediaeval times, and beyond to the Viking period.

In 1014 Ethelred The Un-Read (un-read = badly advised, rather than “Unready”) hired a mercenary Norwegian Viking force to sail up the Thames and attack London, held at that time by King Cnut’s father Sweyn and his Danish Vikings.  The Norwegians tied ropes around the stanchions of the fortified wooden London Bridge, hurled grappling hooks onto its fortifications, turned their longships around, hoisted sail to catch a westerly breeze, and rowed hard with the downstream tide to wreck the fortified bridge, allowing them to bring their own and Ethelred’s English ships and troops up the Thames and outflank the Danes, forcing the Danish garrison to give up control of London and Southwark back to Ethelred and the English.

This was celebrated in a Viking Saga in a poem that went;

“Yet you broke the Bridge of London,
Stout hearted warrior,
You conquered the land
Iron swords made headway
Strongly urged to fight;
ancient shields were broken,
Battle’s fury mounted” 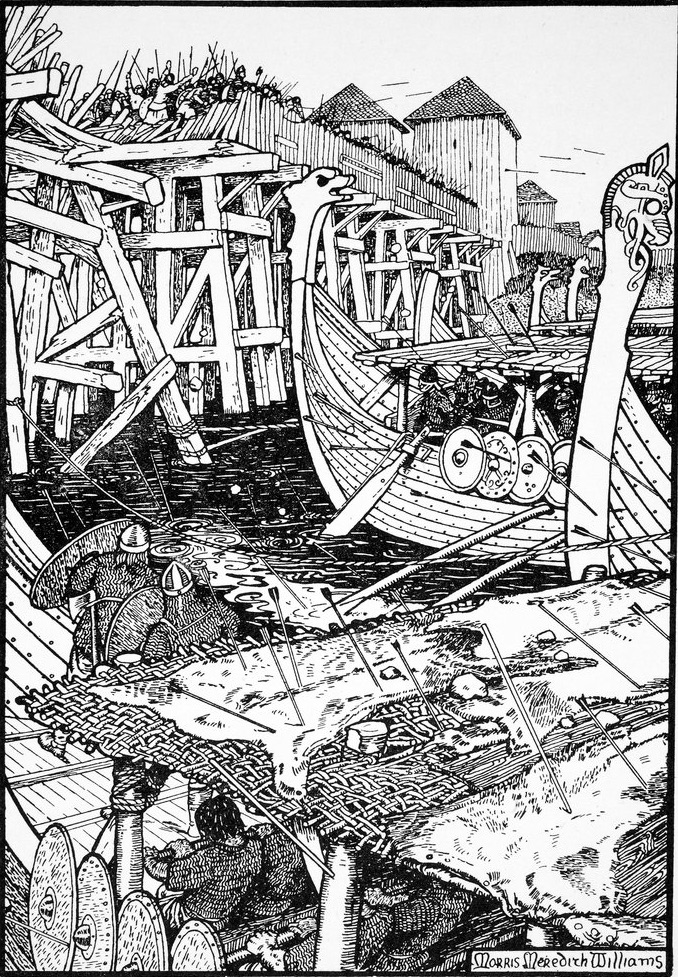 The Rhyme obviously would have scanned better in Old Norse, but it tells the tale, and Grappling hooks and Viking axes and swords have been found in the Thames at the site to reinforce the romance of the story with archaeology.   The Viking who pulled London Bridge down,  Olaf Haraldsson, later became ruler of Norway, and on his death was hailed as a very popular Saint in England becoming St Olaf, with a Church in Southwark by the side of the rebuilt London Bridge, which you can visit today, now known as St Olave’s.  This was typical of robust British paganism lightly dressed as Christianity, a Norwegian Viking General hailed as a saint by the people of London, for helping to recapture their City, by slaughtering the Danes.

An Act of Royal Penance

The mediaeval bridge that Barry has drawn was built to by Henry II as part of his penance for causing the murder of his former friend Archbishop of Canterbury Thomas Becket, the bridge facilitated pilgrimage from London to Canterbury where Becket’s Tomb was situated.  More importantly the Bridge served London from Southwark and the Kent Coast and surrounding countryside, and with commerce, travel, and trade.

The bridge would be affected by the Great Fire of London with many buildings damaged, but the structure survived.

The bridge never fully recovered in architectural terms from the Great Fire and by 1762 the stone mediaeval bridge was 600 years old.  It once stood full of brick and stone buildings along its length, some several stories high, a spectacular site in mediaeval times, as portrayed by Barry, but these had been demolished in that year of 1762, to improve the flow of foot and horse traffic across the bridge.

London Bridge still presented a hazard to navigation, and even with a widened mid-span was unnavigable for large ships.  This blockage to large ships meant that the building of bigger ships could only be carried on down stream in and around the Poplar area.  So London Bridge inadvertently gave rise to the shipwrights of the Port of London in what is nowadays called “Docklands”.  As with many aspects of London, the River Thames and its history decided the trade and future of the lives of its working class inhabitants.

Times were changing, in 1810 Locks were put in up River from London at Teddington, bringing the tidal reach of the Thames back 16 miles down river from its former reach at Staines, taming and controlling the River’s ebb and flow upstream. 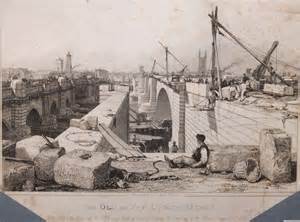 Much wider spans meant  that progress for boats was much safer than it had been, people could be transported with much less risk, and this was taken advantage of by unlicensed watermen, swarming like unlicensed mini-cabs to transport travellers up and down the river.  Worse still from the traditional Waterman’s point of view, steamboats came onto the river scene in large numbers from the 1830s and by 1835 it was estimated that around 3.5 million passengers travelled each year between The City and Blackwall, virtually all by steamboat.

You can see a list of our services here: Time Detectives Family Tree Services